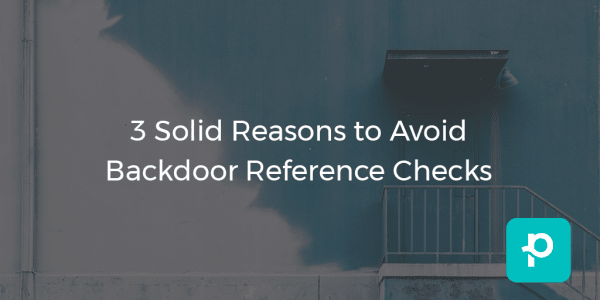 The first thing I do when I’m reviewing a potential candidate for a job I’m recruiting for is check who I might have in common with that person on LinkedIn. It’s a really valuable exercise - especially if I see the candidate is connected to the hiring manager for the open role, for example. I might even reach out to that hiring manager to get an opinion prior to putting that person into the interview process.

But that’s where we can get into some murky waters. About half the time, I’ll get a response along the lines of…

I don’t really know the person, but my friend worked with her - let me ask! or I know his boss at his previous company - I bet she’ll give me the inside scoop.

We’d never reach out to a candidate’s direct boss before getting their permission to do a formal reference check - and hiring managers wouldn’t either. So, why has become an almost-standard practice for folks who are not recruiters to do what’s commonly known as backdoor references - sometimes even before a candidate walks in the door?

No sneaking around! Via Giphy

It’s not that anyone is trying to do harm - it’s a sincerely well-intentioned move: to try to up the quality of candidates walking in the door, and to save interviewers’ time. That said - I do think it’s important to resist the temptation. Here’s why:

Candidates have an expectation of confidentiality

Anyone who applies or is a sourced prospect has an expectation that their candidacy will be held in strict confidence. Even if you are asking someone who worked with the candidate at a past-not-current job, and even if that person is someone you trust implicitly - you’re still breaking that trust. It’s not a great place to start the relationship. Remember that there’s a decent chance the backdoor reference will (confidentially!) let the candidate know you reached out for that reference. Remember, too, that if the shoe were on the other foot, you’d want to be able to control who became aware that you were thinking about making a change.

If you’ve structured your interviews well (The Right Process + The Right Platform = The Best Hires), it’s important to trust in your evaluation process versus trying to circumvent it. Give the candidate the opportunity to prove him/herself, versus relying on an informal opinion that may or may not represent the candidate’s abilities.

You’ll have the chance to talk to those backdoor references

I know, I just said you couldn’t :). But there’s a way to get the information you want from the people you want to talk to, without breaking confidence with the candidate. Allow your candidate to go through the full process. If things go well enough for you to get to the reference checking phase (we always recommend checking references), partner with your recruiter to see who the candidate serves up. If s/he doesn’t offer up the person you’re connected with - simply ask the candidate his/her thoughts about you reaching out to that person for an opinion. You’ll learn a lot simply by asking: either the candidate will say, “Sure! I didn’t even think of that!” or will give you a reason why that person might not be the best reference. You’ll also cultivate the candidate’s trust by asking permission versus just reaching out.

In lieu of a backdoor reference, I’m suggesting a robust and well-timed reference checking process that takes place after a well-constructed interview process - that ideally includes those backdoor references done with the candidate’s permission. It’s hard to resist the temptation, but hopefully, knowing you can still learn what you want to learn can help you wait just a little bit.


As a hiring manager, you want to make sure that you're making the right addition to the team. We get it! But that usually means "sticking to the script" and giving everyone a fair shot at the job (and then evaluating everyone against the same criteria). It's not an easy thing to do, but once you've got a process down, you'll feel confident about your hires!

Need some help determining the right fit? Sign up as a company on Planted -- we can help you find the rockstars you need!


The original article was written by Deb Feldman and first appeared on Gray Scalable.