Job Hunting for Young Candidates: How to be Taken Seriously 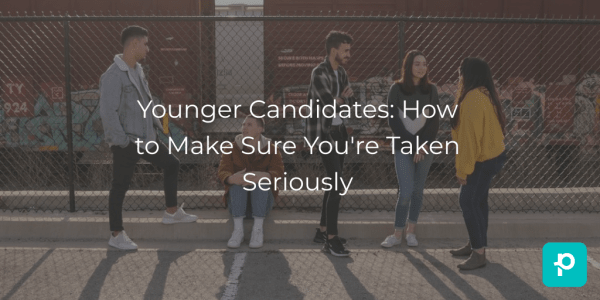 Being young is (mostly) awesome. You have fewer responsibilities, you’re bounding with energy, and you don’t need to ask your younger coworkers how to convert next week’s presentation into a PDF. But it also has its downsides; you’re often taken less seriously because you’re young and inexperienced. It’s not uncommon for older folk to think of you as lazy and over-protected just because you’re a millennial. Apparently, baby boomers were given explosives as play toys--hence the name.

While the stereotypes attached to millennials are false, reductive, and, quite frankly, condescending (millennials are recognized as the hardest working and most well-educated generation in history), we have no choice but to work with the cards that we've been dealt. Here are some tips to make sure that no matter who you meet, you'ill be taken seriously and given the respect you deserve.

1. Clean up your lingo and cut the fluff

Even though filler words are linked to conscientiousness, people who overuse them are often seen as “less intelligent by older listeners”. Cutting out filler words such as "like", "umm", and "y’know", can be tough but well worth the effort. If you’re using a declarative sentence in an interrogative tone, it’s inviting your audience to undermine your authority. If you don’t take yourself seriously, how do you expect other people to?

Using these kinds of fillers makes you sound inarticulate and does nothing to help you be taken seriously by anyone but your peers. We’re not saying you should speak formally 24/7, but you need to be able to speak with conviction when it counts. In addition, try not to beat around the bush to get to your point. It makes you look like an amateur who doesn’t know what they want. Just cut straight to the chase and tell people what they need to know, especially if they’re busy.

It's so important to know what's going on in the world and in your industry. If you don’t know something, don’t try to muscle your way through the conversation as if you do. When you’re interviewing, selling a product, networking, or literally whatever, if you try and BS your way through the conversation, you will get caught. Not to mention it's a surefire way of making an awful first impression. Read the news and keep up with important happenings. It’s one thing to be able to speak eloquently, but it’s another to actually talk about something of substance. Don’t give people a chance to school you and label you as a scrub. It’s a hard label to get rid of.

3. Dress for the occasion

First impressions are mostly visual. If someone sees you from across the room and you look like a hot mess, chances are they’re not going to think you have your life together. We’re not saying that you should wear a custom-made suit to everything or that you need to look like a model fresh off the runway, but make sure that your clothes fit you well and are appropriate for the event. Spice it up, add a splash of color, some texture, some bling, but don’t go overboard – unless you’re talking to Iris Van Herpen. Then go all out.

Jokes aside, if you dress well, you’re so much more likely to be taken seriously by your peers than if you look like a child in your mom’s heels. Even if your office follows a casual dress code, make it a habit to at least pull on something in the morning that doesn’t make you look like you just woke up.

Body language is absolutely essential to how you present yourself. Obviously, you don’t want to be all hunched over, arms crossed, facing away from the person you’re talking to. Relax your shoulders, open up your posture, and don’t be afraid to take up space (but without man-spreading, we beg of you). Not only will this make other people perceive you as someone more powerful, optimistic, and confident, but it will also help you feel that way as well. Face the person(s) you’re talking to, make eye contact, smile, and be animated as you make your points. People will be significantly more attracted to you, and a good "power pose" does wonders as an ego boost. Win-win.

Millenials care about more than just Coachella and Snapchat filters, and it's on you to make sure we can rise above that stereotype. Being young doesn’t mean you automatically can’t be taken seriously, and just a few adjustments to your communication and vibes will help people look past your age and listen earnestly to what you have to say.

If you’re feeling ready to test out these skills in the job hunt, sign up for Planted and start talking with some of the coolest startups around!

Gabriela Balicas is currently a Senior at Rice University, and the Content + Social Media Intern at Planted. Once upon a time, she studied bioengineering, but when she realized she couldn’t 3D print herself a perfect boyfriend, she decided to study sports medicine instead. When she’s not flexing in the mirror, she enjoys scrolling through drake memes and puppy videos on IG...and founding two separate clubs at her school, teaching undergrad classes, and running two successful food and photography blogs.