5 Podcasts to Listen to During Your Lunch Break 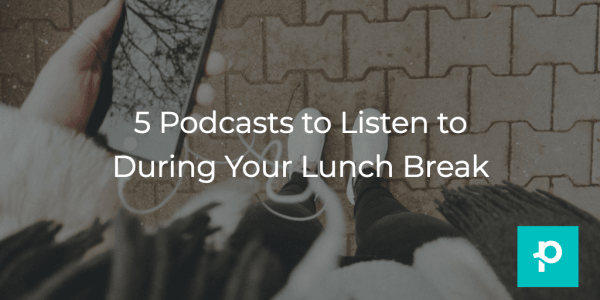 With everyone leading such busy, on-the-go lives, podcasts have quickly emerged as a popular learning platform for the multitaskers of the world. After all, they’re the perfect accompaniment to a long commute or those times when you have to eat lunch at your desk and power through a project. Check out these 5 podcasts that we think you should queue up right now.

Gary Vaynerchuk is the closest thing the media world has to a rockstar. He has built a media empire that includes digital marketing powerhouse VaynerMedia, has written numerous books, and is a very successful public speaker.

He’s also behind The GaryVee Audio Experience, a podcast that offers a little bit of everything: keynote speeches, fireside chats, and segments from his video series on a variety of topics related to entrepreneurship.

"Ninety-nine percent of who you are is invisible and untouchable." This quote from architect, theorist and designer (among other things) Buckminster Fuller is the inspiration behind this podcast, which unveils the creativity and intricate thought often put into things we never think twice about.

The show chronicles the stories behind often overlooked elements of architecture, design, and the world around us. The history of pockets my not sound interesting, but after listening to this podcast, you’ll quickly change your mind. There’s also a truly fascinating episode on the history of Scottish tartan—seriously, check it out.

Each day, Side Hustle School tells the story of someone who’s built a profitable business outside of their regular day job. It covers everything you can think of, from a man who built a six-figure beard oil empire, to sisters who created a personalized board game.

What this podcast does best is get the creative juices flowing. Side Hustle School provides a ton of lessons on creative thinking and will either give you the motivation to try something new or revisit an old idea with a new perspective.

This is another podcast that looks at the stuff we either don’t think about too much, or wonder about for a few seconds in the shower each day (#showerthoughts, anyone?). Stuff Mom Never Told You deep dives into the history of the little things that make the world what it is today.

What makes this one a little different than 99% Invisible is its focus on the female perspective of the world. The weekly discussions are also backed by research so you know it’s legit. Oddly enough, they also have an episode about pockets...

Phoebe Robinson and Jessica Williams. That should be enough to get you to listen to this podcast. But if you still need a little more convincing: Phoebe and Jessica are the 2 Dope Queens in question, and each episode features their hilarious discussions on pop culture and news.

Want a job worth podcasting about? Sign up for Planted and we’ll match you with jobs at awesome companies ASAP.

Allisa Lindo is a Netflix addict and freelance writer who splits her time between NYC and southern Sweden. She previously worked for a Swedish SaaS startup and spends her free time reading TechCrunch and scrolling through social media. Follow Allisa’s random ramblings on Twitter @allielindo.