October 31, 2017 on The Planted Blog and Ace Your Interview, Job Hunting and Step Up Your Search 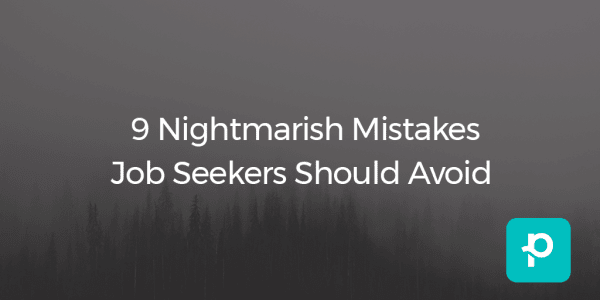 You hear horror stories about people’s job searches gone wrong, and you might think, ‘ like that’ll ever happen to me -- I’m just too good! ’

But then the one time you trip up, that feeling of utter dread wrenches your gut like that moment when you realize they killed off your fave character from The Walking Dead .

Here’s some words of advice though -- number one: mistakes happen. And number two: you need to learn from that mistake to make sure it doesn’t happen again. Unlike the characters in scary movies, you’ll have another chance if you mess up.

Make sure you check out the list below for ways to avoid these mistakes. Just don’t tell us we didn’t warn ya.

Uploading or sending the wrong attachment

How to avoid next time: Sent over a GIF or document meant for another company? Start. Labeling. That. Shizz. Organizing your files on your computer is one of the best habits you can have so that you don’t have to worry about things like uploading the wrong doc. And if you don’t want to start changing your naming system, at least double-check your attachments before sending!

But if it does happen, own up to it. Just resend the real document and apologize for the mixup. Best case, the hiring manager gives you points for being a responsible adult. Worst case, you’re no longer considered for the position and you move on.

Showing up to a phone interview in person

How to avoid next time: Practice good communication. As easy as the mixup happened, it’s just as easy to avoid or fix. If you’re not sure about a specific detail, make sure to follow up. The hiring manager probably hasn’t caught on that you’re confused, so the sooner you clear it up, the better.

And besides, there’s no downside to asking for clarification. You’re doing your part in making sure that everything is in much of your favor as possible. Hiring managers like that.

Being too honest about why you left a job

How to avoid next time: Even if you had a bad experience with one of your last jobs (no matter who’s to blame), the last thing you want to do is mindlessly spew negativity in your interview. It not only comes across as immature, but it also raises red flags to the hiring manager that you might be difficult to work with.

There are ways to frame your answer if and when an interviewer asks, “Why did you leave that job?” Do it in a way that shows you’re focused on moving on and finding a new venture that’s better suited for you.

Showing up late to your interview

How to avoid next time: No matter how much you trust Google Maps, give yourself extra buffer time in case you get lost or there's a commute mishap that's outside of your control. You’ll be thankful you won't have to show up at your interview all sweaty.

Worst case, if timing looks really grim, contact the company as soon as you can and reschedule your interview. It might be that much tougher to woo them if they even let you reschedule, but you'll be on a much fresher start than if you were to come in late (and probably flustered).

How to avoid next time: Ask who you’re meeting or speaking with in advance of the interview and commit it to memory. Write it down in your notes if you have to. By using your interviewer’s name through the interview, you’ll likely connect with the hiring manager better and will come off as more personable.

Freezing up at a tough question

How to avoid next time: Instead of trying to memorize scripted answers to common interview questions, practice telling a few key stories from your experiences. For example, think about that one time you and your team had to meet an extremely strict deadline -- it could work for any questions about teamwork or performing under pressure.

And if that question is one of those unusual ones that you couldn't have planned for? Stay cool and ask them for a moment while you formulate your answer. Especially if it's an open-ended problem-solving question, talk out loud and go through your thought process. For some of these questions the interviewer is more concerned with the way you think, more so than the right answer.

Not knowing what questions to ask during the interview

How to avoid next time: If it’s a company that you really like and/or have just enough information about, you should have plenty of questions to ask. Make sure to do your research beforehand and know as much about the company as you can, especially when you get to the in-person interview. And unless they tell you to save all questions until later, take opportunities throughout the interview to ask followup questions where they make sense. Engaging with the interviewer is important to building their positive perception of you.

Getting called out on a skill that you don’t have

How to avoid next time: You want to show off your skills, but don’t embellish your resume when you don’t have the know-how to actually back it up. It doesn’t look good when a hiring manager asks you to prove your knowledge and the only reaction you have is “gaping fish”. It’s not a cute look -- trust us.

Forgetting to ask for the hiring manager’s contact information afterwards

Darn, knew I forgot something… Via Giphy .

(Remember to be tactful with your follow up email and don’t overstep your boundaries.)

When you’re looking for a job, you want to come across as a smart, capable individual. But that doesn’t always mean you’ll be perfect. Just be mindful through the interview process so you can reduce the likelihood that any of these nightmare-inducing mistakes will happen.

If you’re ready to take on the job search, sign up for Planted -- we’ll help you connect with some of the most spooktacular startups around.

Connie Ngo heads up Content Marketing at Planted. She studied marketing at Rutgers University and jumped industries a few times before realizing she was meant for the startup life. When she’s not buried in spreadsheet data or cooing at every dog on the street, she spends her time running (from responsibilities), playing video games, and cruising on her longboard.