November 22, 2015 on The Planted Blog and Startup Life 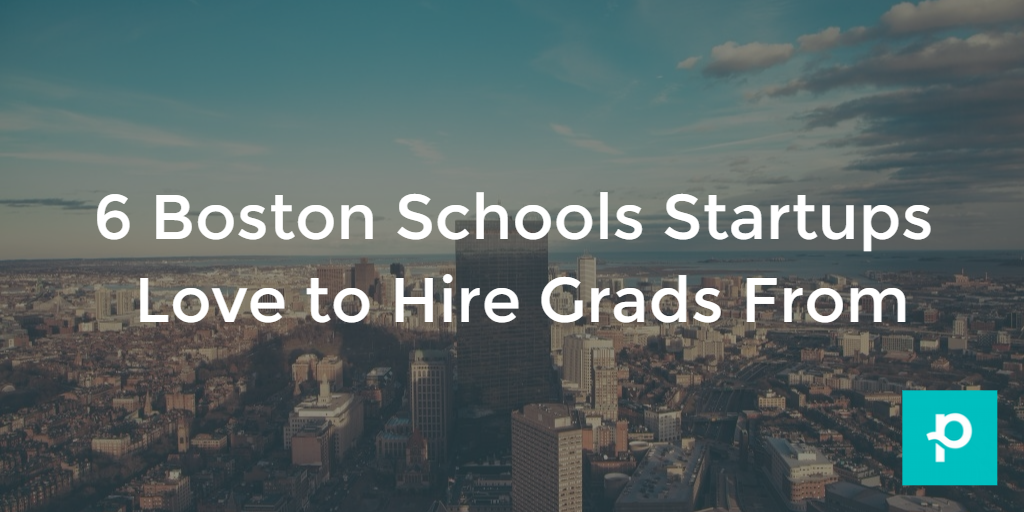 A few hours north of Silicon Alley, another east coast city is putting down serious roots in the startup scene. Boston has always been known as a smart city and the growing startup community is creating a lot of new ways to put all those smart people to use. Buzzworthy startups like Trip Advisor, Rue La La and Hubspot are headquartered in the Massachusetts capital and heavy hitters like Google, Amazon and Facebook have local offices.

In an industry where the people are just as important as the product, there’s nowhere better for startups to set up shop than Boston. The greater Boston area is teeming with curious, driven students and recent grads from over 100 colleges. Boston’s thriving university network is fueling the startup scene with student-run accelerators like Dorm Room Fund and Rough Draft, campus hackathons, startup fairs, innovation centers and more. Here are some of Boston's top colleges that best embody the startup spirit.

Collaboration is key for any entrepreneurial endeavor. Despite not having a specific academic concentration in Entrepreneurship, Amherst College students are building an on-campus entrepreneurial community through on-and-off campus events and taking advantage of the unique Five College Consortium.

The Amherst College Entrepreneurs Society (ACES) is a student organization that serves as a primary resource for entrepreneurial events . Recent events include “Full Contact Entrepreneurship and the Liberal Arts” and “What’s the Deal with Bitcoin?” and feature startup world heavy hitters such as Alexis Ohanian, Co-Founder of Reddit, and Gavin Andresen, chief scientist at Bitcoin, in an intimate small group atmosphere (with pizza!). ACES also runs workshops and Elevator Pitch Competitions and connects students to the Amherst alumni network. For students interested in social business, the Social Innovation Leadership Team (SILT) holds Idea Jams, a Problem Solvers Speaker Series, and helps students navigate the unending quest for grant money.

All of the acronyms seem to be having an impact. 9 Amherst students were recognized by the Grinspoon Entrepreneurship Initiative Spirit Awards for their early stage business concepts including a liberal arts school in China and a used appliances exchange market.

In today’s world, a well rounded business education has to include entrepreneurship. Best known for producing finance whizzes, Bentley has bumped up its entrepreneurial offerings, introducing a formal minor in Entrepreneurial Studies.

Bentley is well aware of the needs of the modern day post grad, especially after the 2013 launch of the PreparedU Project, a large scale research initiative that digs deep into issues millennials face in the workplace (beyond bad coffee). To expand the student body mindset from CFO to CEO, Bentley’s Corporate Immersion Institute gives students the opportunity to advise and collaborate with startups on real world business problems from ideation to funding. In addition, the Institute creates a marketplace for alumni looking for investment opportunities.

In 2014, Bentley held its first pitch competition, the Bentley Shark Tank, where 6 student-run startups presented to over 250 investors. On the real Shark Tank, Jeff Martin ‘07 succeeded in raising money for his mini-popcorn company, Pipcorn.

In line with Boston College’s Jesuit traditions, the Edmund H. Shea Jr. Center for Entrepreneurship hopes to “thrive as a place for young entrepreneurs with Jesuit ideals who will lead businesses skillfully and with a social conscience,” said John Morrissey, executive vice president and director of J.F. Shea Co. Inc.

The center co-sponsors an Elevator Pitch Competition and university-wide Venture Competition with the Carroll School of Management, the academic department that houses the college’s Entrepreneurship Co-Concentration. An annual startup fair directly connects BC talent to the local Boston startup community. Boston College pride runs deep as BC alumni in the Boston area have started a summer accelerator program, the Soaring Startup Circle, to inspire and support undergrad startup teams.

In the past 5 years, startups launched by BC grads have raised over $100 million in funding. Three founders who started their companies at BC were featured on Forbes’ “30 Under 30” List in 2015: Deckard Sorensen '12 of NBD Nano, Tom Coburn '13 of Jebbit, and Nick Rellas '13 and Justin Robinson '11 of Drizly.

Emerson College puts the design in design thinking. With a college-wide focus on communications and liberal arts, Emerson might not seem like the typical startup school but entrepreneurship has never been about the typical. Long-term accelerators offer dedicated support and resources and have earned the college a spot on Forbes’ list of America’s Most Entrepreneurial Colleges 2015.

The Entrepreneurial Studies minor is actually part of a year-long immersive academic program known as E3, or theEmerson Experience in Entrepreneurship. As the Boston Globe writes, “Students enter E3 with an idea, and emerge eight months later as CEOs of their own companies.” Another option for those who prefer agility to academic credit is the Emerson Accelerator, a streamlined two-year program that provides professional space, expert advice, and seed money to student startups. The Fall 2015 cohort included bistara, a freelance marketplace for college students and a perfect example of Emerson’s unique brand of creative meets cash flow.

Emerson has recently introduced a new major, the Business of Creative Enterprise, to enhance a traditional business major with the many benefits of a creative mind.

Northeastern offers various Entrepreneurship concentrations as well as a formal Venture Mentoring Network and Investor Network. Even more impressive, students are so entrepreneurial that they’ve built many of their own startup resources.

IDEA is Northeastern’s completely student-led Venture Accelerator and it was established with the support of the university in 2009 (before Instagram was even invented). The accelerator shows no signs of slowing down with 169 currently active student ventures including Pickasound, a social platform that allows users to remix music with friends, and Genius Box, a monthly subscription to STEM awesomeness in a box for tomorrow’s founders. Northeastern undergrads also run their very own design studio, Scout, and networking organization, the Entrepreneurs Club. For more specialized interests, the Health Sciences Entrepreneurs group is headquartered in the College of Health Sciences and supports innovation in growing fields such as pharmacy, physical therapy, counseling, and health IT. Yep, it’s also student-led.

To top it all off, Northeastern hosts an annual large-scale event, Global Entrepreneurship Week, sponsored by The Kauffman Foundation and featuring innovators from over 130 countries.

With a strong focus on global citizenship and public service, Tufts University embodies the idea that doing good is good for business, in any country.

The Entrepreneurial Leadership Studies program is the academic hub for all things entrepreneurship, offering a minor and 16 entrepreneurially focused classes. The program includes the Tufts Entrepreneurial Network (TEN) which connects students with entrepreneurial resources and opportunities beyond academia. TEN also selects student startups for the Tufts Venture Lab, a dedicated co-working space, and runs a university-wide $100K New Ventures Competition. Recent winners of the competition include Spotlight Parking, an on-demand valet platform, and the Curious Learning, a technology driven learning system for kids currently deployed in Africa, India, and the United States. Students with big ideas and an international mindset can find grants, research funding, and internships with global organizations through the Empower Program for Social Entrepreneurship. On the ground, the student-run Tufts Entrepreneurs Society provides networking opportunities such as speakers, workshops, and social events to keep everyone connected and motivated.

Through academics, extensive programming, and active student participation, Tufts gives hope (and tons of resources) to founders who believe that startups can change the world.

Boston’s entrepreneurially minded students aren’t just working for Boston startups; they're starting companies of their own and creating even more jobs and opportunities for students of the future to catch the startup bug. That’s our kind of feedback loop.

If you can't get enough Boston colleges, check out our second article in the series here.