January 22, 2019 on The Planted Blog and Job Hunting, Startup Life and Step Up Your Search 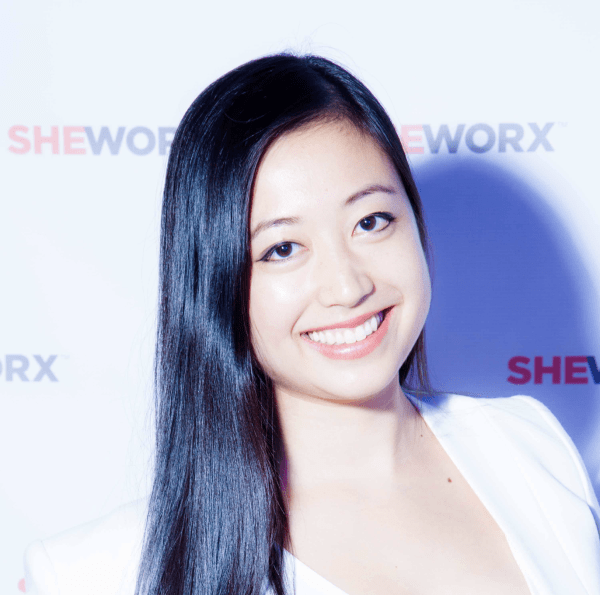 Dreaming of a startup career, but have no idea how to get there? On Tuesday, January 15th, we hosted a panel at General Assembly NYC where we talked to three startup career transitioners about their career trajectories and advice for jobseekers. Here's how panelist Lisa Wang went from former gymnast to founder and CEO of SheWorx.

Where do you work, and what do you do there?

I am the founder and CEO of SheWorx, a global platform that helps female entrepreneurs get access to the investors, mentors, and skills they need to grow and scale successful businesses. Our mission is to close that gap by collaborating and not competing, and we currently have 20,000 women on our platform.

What did you study in college?

When I went to college, I had just retired from gymnastics and had no idea what I was going to study. All I knew from high school is that I loved to read, and I actually went through about six different majors before I finally settled on literature.

What was your first job after college?

I first ended up getting a post-graduate fellowship to study economics in China. I knew I didn’t want to go into the two things that everyone was being recruited into—management consulting and investment banking—but somehow after that year, I still ended up in finance, working at a hedge fund on Wall Street as an analyst.

When did you realize that finance wasn't for you?

I remember the day my boss called me into his office and asked, “On a scale of 1-10, how happy are you?” In a split second, I thought that 7 is the answer that you’re supposed to give at the very least, but I was definitely not a 7. So I blurted out, “6!” That was the beginning of the end of that journey. I still stayed on for three more months, and during that time I kept a good relationship with my team and tried to figure out what was next.

What did you want out of your next career move?

I was reading a TechCrunch article about a new app called Yo that just received $1 million in seed funding. It did one thing: you would press a button and you would send the word “yo” to a friend, and they could “yo” you back. I was left thinking, "I am going to these monthly meetings where I am listening to the portfolio manager talking about how we’re .1% up month over month and I probably contributed to 0.0001% of that, if even." I wondered how much more I could do if I just had the capital and creative freedom. I knew I had a lot of ideas, and I just didn’t feel like that this job was giving me the space to exercise that.

How did you figure out what your next career move would be?

I created a list of my interests, which included wine. So I cold-emailed a bunch of top sommeliers in New York and ended up meeting up with one of them. He said that there were two ways to break into the wine industry: as a barback or as a salesperson at a wine store. Next thing I know, I got a job as a part-time salesperson at the wine store on the Lower East Side while I was still working at the hedge fund.

For about two months, I was working at the hedge fund by day and the wine store by night for a few days a week. I would go to the wine store from 6:30pm-1am, so I was literally non-stop.

What made you jump from the wine industry to startups?

I found that wine, like finance, was just as male-dominated, old school, and not very innovative. I realized that in addition to creative freedom, what I really needed was something that was fast-paced and innovative. I also realized that I didn’t love things, like cars for instance, but I loved a feeling of creative freedom and I loved the feeling of being on top of trend and making impact.

How did you go about that transition?

I ended up enrolling in a program called Startup Institute, a two-and-a-half month summer bootcamp to learn how to transition from the corporate world into startups, because I thought that I didn’t have transferable skills (like coding).

After that, I ended up working at a mobile design development agency as my first startup job. I did operations, so I sat right next to the CEO who evaluated all of these startup ideas and apps. I got to see how he critiqued design and how he decided if the apps deserved funding or didn’t deserve funding, so I learned how he looked at and determined good ideas.

I used what I learned there during Startup Weekend, which is a three-day hackathon. I pitched an idea, built a prototype with a team, and ended up winning. It was an on-demand, late night munchies company that catered to college students.

How did your first startup lead you to SheWorx?

As I was fundraising for my first startup, I realized just how real the challenges were as a woman trying to face the male-dominated investor landscape. That led me to starting SheWorx roundtables, creating a space to meet other female entrepreneurs who were going through the same things as I was. Three years later, here I am!

Which skills would you say helped launch your startup career?

My first career was as a gymnast on the U.S. Team. I spent ten years in training, and learned a lot about leadership skills and persistence, which I think is probably the top thing you need as an entrepreneur.

Another important skill I have is being a good listener. People who are good listeners tend to process information, think about things analytically, put pieces together and think through strategy, and have more patience. As a leader, you don’t need to be the person to tell everyone what they need to do without considering the team or without considering the strategy.

What are some qualities you look for in startup candidates, regardless of career background?

We’re looking for doers . How you execute your trial assignments speaks volumes about how you are going to execute if you were on the team.

Any last words of advice for people who are trying to transition to a startup?

Take some time to actually think about not just what kind of product or service or type of company you want to work for, but also what stage. The last thing is if you do decide that you want to do it, don’t stay in the grey zone for too long. That’s the zone of wanting to but being afraid to. That time will pass by really quickly and you’ve only got one life.

Answers have been edited for length and clarity.

Want to find a job you’ll love? Sign up for Planted and get matched to opportunities at some of the coolest startups and other high growth companies.