July 26, 2015 on The Planted Blog and Off The Clock and Startup Life

Besides being one of the funniest shows on TV (or whatever HBO is now), Silicon Valley makes a lot of great points regarding what it’s actually like to work at a startup. There aren’t many people like Bachmann, Russ Hanneman, or Jared (Original Jared) in the world, but there are a ton of startups trying their hardest to navigate the startup maze.

What’s great about Silicon Valley is that it draws its comedy from a lot of real life startup anecdotes. Things like what it’s like to raise a round of funding, how to negotiate a salary, and the ways a company’s board can have a huge impact on operations.

Luckily we here at Planted have compiled the best lessons Silicon Valley’s new season had for budding entrepreneurs:

You don’t have to be good at sports to swing for the fences, but you’ll need good investors on your team if you really want to play ball. Some investors might offer you nice gifts or throw flashy parties, but it might be wise to pick them last. It’s more important to have investors that care about your company and the overarching mission, even as cool as it might be to hang out with the Winklevoss twins.

All relationships are valuable and important. You don’t want to tarnish any friendships when you might need those people in the future. Maybe Pied Piper wouldn’t have had to raise funding from Russ Hanneman if Bachman hadn’t dissed every VC firm in town (including making rude comments about their muffins).

Not too fast! No deal is ever actually complete until you have it in writing. Paul Craig, from ArenaVC just wrote about how his investment in Airbnb fell through in the last minutes. Negotiations can always break down and you never know when Gavin Belson might try and sue you for everything you’ve got. Even the best of “Bros” might have hidden motivations.

Use the extra space to start a company. It seems that launching a startup out of your garage is the equivalent to starting a garage band back in the 80s. Besides Pied Piper, Apple, Google, Hewlett Packard, and Facebook were started in garages and living rooms. Just make sure that your old, crazy, ferret raising neighbor doesn’t report you.

Silicon Valley showed us how important it is to keep your compensation details private. Just like your credit card number, your mother’s maiden name, and the amount of times you’ve seen Pitch Perfect, that information is for you and you alone. At the same time, you shouldn’t go around snooping for info about what your colleagues are making. Comparing salaries and equity can cause unneeded workplace stress and competition, two things that are toxic to any small company. Dinesh and Gilfoyle learned this the hard way when Carla tricked them for assuming she was getting paid a higher salary.


6. Don’t forget to take care of yourself

Looks like you have a case of the night sweats. It’s important to look after your own personal and mental management, or those night sweats might turn into bed-wetting. Personal health, nutrition, and sleep are crucial to making the best middle out algorithm on the market.

Sucks to suck Gavin Belson. Nucleus wasn’t Windows Vista bad, it was Apple Maps bad. When Apple launched the (highly anticipated) Apple Maps back in 2012, you were more likely to be guided off the side of a bridge than to your destination. By the way, if you have a friend that still uses Apple Maps, please introduce them to a thing called Google Maps. Friends don’t lets friends use Apple Maps. Make sure your product is ready and tested before you launch. 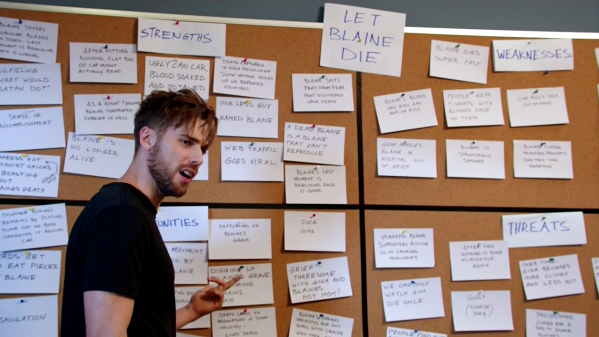 A SWOT (Strengths Weaknesses Opportunities Threats) analysis is always helpful when making the hard choices. SWOT can be crucial when deciding how much equity to give out, how many engineers to hire, or whether an acquisition is truly worth it. But, it might cross the line when you’re trying to determine whether or not its okay to let someone die.

Make sure to perform proper due diligence. Had it not been for Hooli’s negligence when preparing their employee’s contracts, they may have actually won the case against Pied Piper. Now, Richard gets to keep Pied Piper, even if he does refer to his computer as his girlfriend. If you don’t read the fine writing, you may end up like this:

No. Not radio on the internet. Return On Investment. It’s important to be wise when choosing between potential investors as board members for your company. Radio on the internet may be great, but you don’t want an investor that cares more about billboards, “Shwag”, commas, and cars than running a successful company.


Ready to work at the next Pied Piper? Want to take down the Hoolis of the world? Signup on Planted so we can help you find an awesome job at a high-growth startup. With a little luck and a lot of hard work, you might even get to be a member of the 3 Comma Club.