What You Need to Know to Land a Startup Career feat. Planted & Stacklist 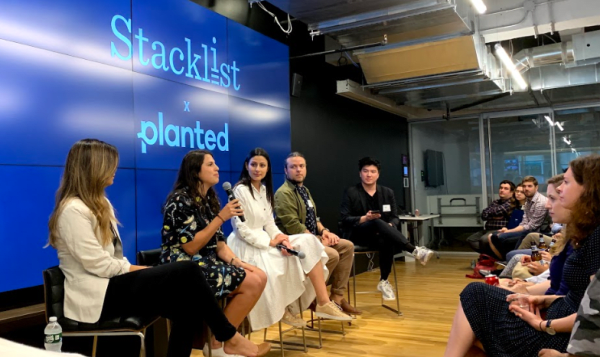 There’s a lot of hype around getting into a startup career. Plenty of startup veterans have forged paths to success, but what’s the reality? Although working at a startup may seem appealing, how can you know if it’s right for you? On June 24th, we co-hosted a panel with Stacklist featuring Bilyana Freye, co-founder and CEO of Hoppin, Adrian Ryan, employee #2 at General Assembly, Michelle Suconick, Head of Communications at Ro, and Susan Zheng, co-founder of Planted. They answered tons of questions and shared their advice for navigating challenges when breaking into startups.

Tell us about yourselves and what you do.

Adrian Ryan: I was the second employee at General Assembly, and I worked with them for three years. Since then, I’ve worked with a variety of startups; I’m currently working with Measured Politics, a PAC that fundraises for Democrats in red states and works with political scientists to publish research on our fundraising efforts.

Bilyana Freye: I’m the co-founder and CEO of Hoppin, a job-shadowing marketplace. Our platform allows people to spend a day in different jobs and experience what they’re about. I was inspired by my own curiosity about working in the startup world. Hoppin provides a way to see what you’re getting yourself into before you start a new job.

Michelle Suconick: I’m the Head of Communications at Ro. We’re a healthcare company that powers digital clinics; we power Roman for men, Rory for women’s health, and Zero, a platform that helps people quit smoking. I was employee number one and we’ve now grown to over 150 employees.

Susan Zheng: I’m one of the co-founders of Planted, a career discovery platform that matches high-growth companies with non-technical talent in the startup space. My career started in finance during the 2008 financial crisis, which taught me that it may not actually be that risky to work at an early-stage startup. I joined the team at ToughMudder and worked there for two years before founding Planted.


Why did you decide to transition to an early-stage startup?

Susan: When I left finance, I looked around at other people’s trajectories for the next 10 to 20 years and I didn’t see myself in their shoes — I wanted to start my own company. So I decided to start by working at an early-stage startup and got a position at ToughMudder. I was looking to get in with the earliest startup I could so that I could work hands-on with the founders and learn how companies grow from the ground up.

Adrian: I was working as a barista and I happened to know one of the founders of GA from college — it’s definitely good to know people. At the time, GA was a co-working space and they needed someone to help them grow. I came in and started working with their CEO, and after about 2-3 weeks working closely together, it felt like they knew me and trusted me.

Michelle: I was at a PR agency helping startups tell their stories, but I really wanted to go in-house and work directly with leadership. So I built myself a cushion, quit my job, and gave myself three months to be my own client and try to find my dream job. I did tons of interviews just to learn about startups in an exploratory way. I found Ro’s founders through Facebook and I was intrigued enough to reach out, and when I met them, I knew that was it for me.

Bilyana: I used to work for one of the UK’s oldest private banks — like, the Hogwarts of banks — so I was fascinated by what was happening outside of that space. I came across a startup company that I was a buyer for and I was totally emboldened by their mission. I eventually realized that I had become such a champion for them that I made a move from my full-time job to being their major promoter and from there it was a natural transition for me.


How have things changed since your first year as an early-stage employee?

Adrian: I changed a lot during my first year at GA. I was being given the ability to test things, see what’s not working, and make changes. We had this beautiful space and we had to figure out how to leverage it, especially when it wasn’t being used. We had to really strategize, and there was a point when I realized I liked how quickly things were growing and how many opportunities there were.

Michelle: One of our angel investors was the cofounder of Casper, and their first full-time hire was a communications person. Our founders took his advice to bring on a communications person as a first hire. We were all in the trenches; we lived and breathed Ro. We worked so hard and it was really cool, because you’re hired for one expertise but there are so few of you on the team that ultimately, you become a generalist.

Susan: At ToughMudder, I did a little bit of everything. I was their personal internal consultant and it was crazy, awesome, and awful — we were creating a new market with no framework and no standards. I learned that not all startups are made alike; when you’re a five-person startup, your day is very different than someone at a 200-person startup, but there’s no right or wrong. You have to figure out what you want. Do you want to dive really deep into a specific function? Do you want to own and lead a team? Do you want to wear 50 different hats? Different startups might be a fit for you depending on what you want.


What factors should you consider to know if a startup is the right fit?

Michelle: Good leadership, 100%. You should be inspired by a company’s mission, but you should know that the founders have their own expertise and complement each other well enough to run a successful company.

Adrian: I think a trust of a leadership team is important. You can have really great managers who are just not right for that space, don’t have the right experience, etc. It comes down to trust and knowing your team. If we’re talking about a smaller startup, there may not even be an HR department, so you need to know that the people you’re working with will advocate for you.

Bilyana: It’s important to believe in the mission of the startup because that’s going to carry through the tough times, the 20-hour days, and all the other ups and downs. It feels magical when you build a camaraderie with other people who all share the mission of the team and believe in making it happen.


What’s the best way to get your foot in the door and make a good impression when joining a startup?

Susan: It depends on the stage of the company. When a startup is smaller, the founders are really accessible, so I would just email them. They’ll probably really appreciate the gesture. and even if they’re busy, they’ll pass you along to the most relevant team member. If you let them know that you’ve applied to a position, they’re often the ones looking at those resumes, so your name will spark something later.

If you’re not able to get in front of the founders at a later-stage company, see if there’s someone else you know there, whether or not they’re on the team you’re looking to join. They can give you an inside referral, and personal referrals are the best way to go.


Any advice for interviewing at a startup?

Bilyana: Especially at an early-stage startup, try to add value in the process. For example, if you’re interviewing for a position and it isn’t a fit, but you offer to connect them with your friend or a company that can help them, that adds value. We’re all looking for doers and people with proactive attitudes, and you can definitely show these things in small ways by offering something unique.


Why do you think someone should work at a startup?

Adrian: It’s really fun, you get to actively create and build something in the world that other people will use. There’s nothing cooler than that.

Bilyana: It’s a very humbling learning experience. Whatever happens at a startup, you’re going to be better off after you’ve had that role because it’s going to set you up for future success.

Michelle: You get to see the direct impact of your work.


Answers have been edited for length and clarity.